By Vaisnavi devi dasi (Conch, Jan/Feb 2014) Woodford – camping in the heat,long hours standing and serving out prasadam, sleep deprivation – one may ask why we voluntarily choose to do this. As aspiring devotees we understand that there is an unexplainable taste in...

Camping is available and all locations have nearby beaches which are either walking distance or a short bus ride away. 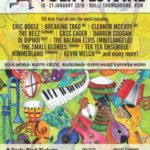