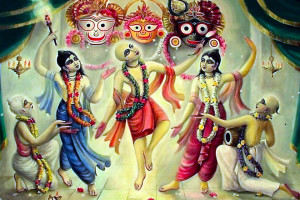 Today, some yoga practitioners consider the physical benefits of yoga to be the end in themselves. But according to the traditional yoga systems, physical exercises are just one step on path of God realization. The Gita ultimately prescribes bhakti-yoga (the path of dedication and love) as the culmination of other yoga practices. Bhakti-yoga focuses on developing our dedication, service and love for the Divinity, Lord Krishna.

The path of bhakti-yoga is developed through a variety of activities. These include mantra meditation, or the chanting of the names of God. The chanting is done either individually on beads (japa) or in community by chanting mantras accompanied by music (kirtan). The study of sacred texts such as the Bhagavad-gita and Srimad Bhagavatam, associating with like-minded spiritual aspirants, eating sanctified vegetarian food, and living in a way that upholds the principles of truthfulness, mercy, austerity, and cleanliness, are all core practices for a life of follower of bhakti.

God is a Person

Often people become puzzled when they see a picture of Lord Krishna playing a flute. Even though the Western religious philosophy describe that God is our eternal father of every living entity – but it gives a little description about his form and features. As a result, many people think Lord is formless or void. 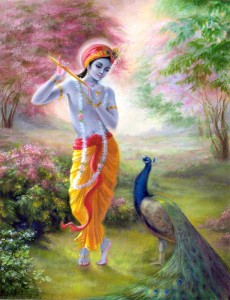 However, the Vedic literature describe that Lord is not abstract. He has impersonal and personal aspects to his personality which is eternal, blissful and full of knowledge. The sacred texts conforms in exact details to descriptions of the Supreme Being – His name, His activities, His opulences, His associates and His form.

To elucidate further, if we agree that everything in this creation has a form or say that God is our eternal father, logically it does not make sense the source of all existence can be formless and without any personal qualities. As a single drop of water has the same qualities as an unlimited drops of water in ocean , so does our individual personality with the limitless qualities of God’s personality.

The Vedic authorities delineates ,one who is possession of all these six opulences – wealth, power, fame,beauty,wisdom, and renunciation at the same time to unlimited degree is understood to be the Supreme Personality of Godhead.

The scriptures describes various aspects of the Lord from bluish hue to blooming youthfulness. The Bramha Samita describes the Lord who is adept at playing on His flute, has lotus like eyes, whose head is bedecked with a peacock feather, whose figure of beauty is tinged with the hue of monsoon clouds, and whose unique loveliness charms millions of cupids.

Meditation is a spiritual practice found in practically all religious and spiritual traditions, although the methods differ.

Traditional yogic systems employ complex meditation techniques, often working with different postures to align our external and subtle selves and focus our minds towards self-realization. To quiet the mind and provide a point of focus, yogis are advised to concentrate on upon mantras including Sanskrit syllables and the names of God. 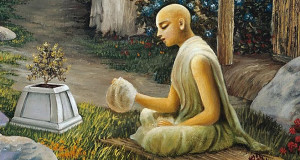 The Vaishnava tradition recommends the chanting the names of God to be a particularly effective method of spiritual awakening, simultaneously opening us to an incredibly empowering experience.

In this system, meditation has three distinct forms: japa, kirtan and sankirtan. In japa, the meditator individually and softly recites God’s name with the use of beads, similar to a rosary. Kirtan is a public meditation, in which one loudly sings the names of God accompanied by musical instruments. When performed in a group this is called sankirtan.

This entire process is centred around the recitation of the names of God. The prayer or mantra that ISKCON devotees repeat is called the Maha Mantra, or the “great mantra for deliverance.” It is made up of three words Hare, Krishna and Rama. Hare refers to God’s energy. Krishna and Rama refer to God as the all-attractive and all-powerful one who is the source of all pleasure. Repetition of this mantra awakens the soul and brings strength, peace and happiness. It ultimately connects us with Lord Krishna and reveals our original spiritual life of eternal bliss and knowledge.

Sometimes referred to as the “kitchen religion,” ISKCON, or the Hare Krishna Movement, believes the art of cooking is a sacred experience. The preparation and eating of food should be based on principles of compassion, non-violence and balanced living. Thus, Krishna devotees advocate a lacto-vegetarian diet, strictly avoiding meat, fish and eggs. 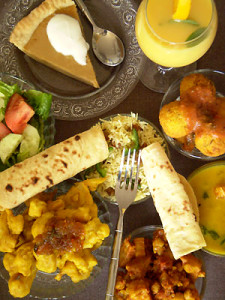 The Bhagavad-gita further declares that one who lovingly offers his food to God according to scriptural guidelines becomes freed from sinful reactions, or karma. Stopping animal killing reduces our collective karmic debt, and thus helps alleviate the horrors of war which so plague the modern world.

More than just practicing a vegetarian diet, ISKCON members actively promote vegetarianism. Krishna devotees have authored many highly acclaimed cookbooks, including the best selling Higher Taste Vegetarian Cookbook, with more than a million copies in print. As early as 1992, Yamuna Devi was awarded the James Beard Award for Best International Cookbook for her classic vegetarian text Yamuna’s Table. And, Australian-born chef Kurma Dasa has not only authored several cookbooks, but his popular “Cooking with Kurma” series was aired on public television stations around the world.

No sacred treatise, has a setting as intriguing as the Bhagavad Gita. The dialogue between the princely warrior Arjuna and Lord Krishna, the Supreme Godhead before the onset of the Mahabharata War is universally renowned as the jewel of India’s spiritual wisdom. 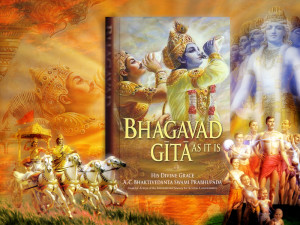 Paralyzed by the fear of killing his kinsmen, friends and teachers in the opposite army, Arjuna decided not to fight putting aside his social duty as Kshatriya (warrior). Krishna, who agreed to become the driver of Arjuna’s chariot, eloquently explains him on the battlefield about His duties of being a warrior. The conversation moves to a series of questions and answers about metaphysical concepts such as soul, relationship with God, liberation, Karma Yoga ( the principle of non-attached action), Gyaan Yoga (knowledge) and Bhakti Yoga (devotion).

In translating the Gita, A. C. Bhaktivedanta Swami Prabhupada has unlocked all the secrets of the ancient knowledge of the Gita and placed them before us as an exciting opportunity for self-improvement and spiritual fulfillment. The Bhagavad Gita As It Is the largest selling edition of Gita in the Western world and translated in over 76 languages.

“When doubts haunt me, when disappointments stare me in the face, and I see not one ray of hope on the horizon, I turn to Bhagavad-Gita and find a verse to comfort me; and I immediately begin to smile in the midst of overwhelming sorrow. Those who meditate on the Gita will derive fresh joy and new meanings from it every day.” Mahatma Gandhi

The word Veda can be traced to the sanskrit word vid which means “to know” or “knowledge.” The Vedic texts contain information on varied topics: from medicine to cosmology , from techniques of yoga and meditation to explanation of lessons in governmental organisation and military protocols. 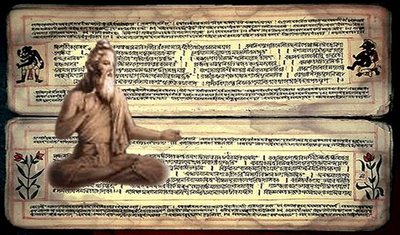 In addition, there are Upavedas (sciences not directly related to Vedic study) like Ayurveda (study of holistic medicine) and Gandharva-Veda study of music. It also included Puranas such as Srimad Bhagavatam and epics like as Mahabharata and Ramayanas.

According to the Vaishnava tradition, this knowledge was passed down, from master to disciple in disciplic succession or parampara.

Everyone at some time in life wonders what happens after death. Throughout history, some of the most thoughtful minds have advocated that life does not end with the death of our body, but continues on via a process known as reincarnation. In the Western world, followers of the Orphic religion in ancient Greece were the first known exponents of reincarnation. They were succeeded by Pythagoras, Socrates, Plato and a host of other philosophers. 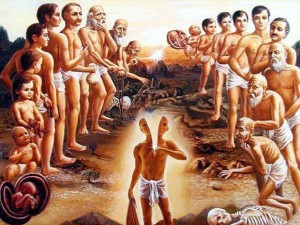 The Vedic literature of India advocates that the soul, or atma, gives life to the body. Life does not arise from a particular combination of material elements as some modern scientists theorize. At the time of death, we leave one body and enter a new one. That is called reincarnation.

The concept is not as alien as it might seem. We can observe that we change from one body to another throughout our lifetime. Our body at birth is completely different from our adult body. Yet throughout these changes, the conscious self remains the same. Similarly, the conscious self remains the same at death and transfers from one body to the next in the cycle of reincarnation.

Our present body is the result of a long series of actions and reactions in previous lives. The law that governs this is known as karma: every action has a reaction. Our previous actions have produced our present body, and our current actions will determine our next body.

Only in the human form can we free ourselves from the endless cycle of reincarnation, of birth and death, by re-establishing our eternal, loving relationship with Lord Krishna. As Krishna states in Bhagavad Gita 8.16, “From the highest planet in the material world down to the lowest, all are places of misery wherein repeated birth and death take place. But one attains to My abode.. never takes birth again.”

Ever wondered why bad things happen to good people? Why we suffer? Why some days are awesome and others morose? If God exists, why does He keep quiet about it? The answer to all the above questions is karma.

Karma is one of those topics that many people know about, but few understand the intricacies of it. In literal terms, “karma” means “activity” and the law of karma regulates the reactions to our activities. If we act in good, or pious ways, we reap good reactions. If we act in impious, sinful, or destructive ways, we reap bad reactions in the future. Christian theology explains, “As ye sow so ye shall ye reap” while in physics karma is expressed by Newton’s Law, “For every action there is an equal and opposite reaction.” 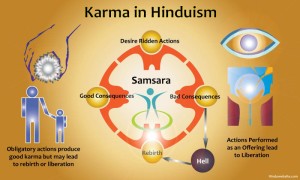 Karmic reactions include not only things that happen to us, but determine our health, wealth, intelligence, physical appearance, and social status, as well as our personalities and inclinations. While we have some degree of freedom to choose our current actions, our choices are influenced by our natures, or personalities, which have developed from our previous actions.

Karma thus locks us up in a cycle of action and subsequent reaction. As long as we are in this cycle, we will experience both happiness and distress. Even if we act in a pious way, we destine ourselves to accept another material body at death to enjoy the reactions to our materially good actions. As long as we accept a material body we can not avoid the miseries of disease, old age, and death.

Fortunately karma is temporary. We can break free from its bonds by performing spiritual acts in service to Krishna. Such acts of devotion, or bhakti-yoga, purify the soul and gradually awaken our spiritual knowledge and innate love for Krishna. Thus, both our karma and our long-standing desire to enjoy life within the illusory material world—the root cause of our bondage—are destroyed.