Govinda’s Cooks Up Good Vibes at Splendor in the Grass 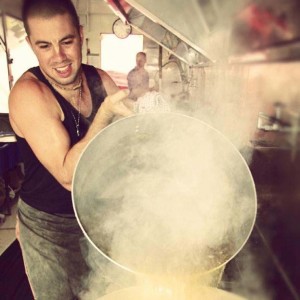 It’s winter down under, a popular time for music festivals in Australia. And last month’s Splendor in the Grass, the biggest festival of the season, drew 20,000 fans every day from July 27th to 29th.

But one of the groups with the most fans isn’t a band at all—Govinda’s Catering, from ISKCON’s New Govardhana community an hour’s drive away from the festival site, has served up delicious vegetarian meals at Splendor since the festival’s launch in 2001.

This year, they served sanctified food, or ‘prasadam’ to around 7,000 people, arriving a day early to sustain festival volunteers and staff as they set up the site.
Govinda’s Catering has come a long way since New Govardhana temple president Ajita Das attended Byron Bay Bluesfest in 1992 with just one other devotee, and saw the incredible potential for prasadam distribution it held.

Today, Ajita’s devotee crew caters festivals every other weekend all year-around, including Woodford, The Dreaming Festival, The National Folk Festival, and The Big Day Out, a rock concert attended by 50,000 youth. Altogether, they serve prasadam at fifty to one hundred festivals every year.

“We have a refrigerated truck for the food, a six-ton trailer for smaller events, and a twelve-ton, 9.5 meter mobile Govinda’s kitchen, fully-fitted out with commercial catering equipment, for larger events,” says catering coordinator Nitai Chand Das. “At Splendor in the Grass this year, we also set up a white marquee as a restaurant in front of the kitchen trailer, and decorated it with Indian-style hangings and potted plants.” 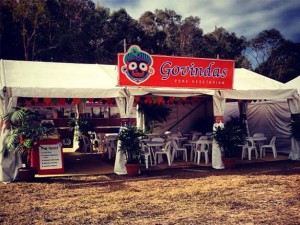 Nitai was part of a twelve-person team catering at Splendor along with organizer Ajita, brahmachari monk Krishna Gana Das, and volunteer cooks Pitambara and Trayadisa from the successful Govinda’s restaurant in Burleigh Heads, on the Gold Coast.

Every day the devotees cooked the standardized $11 meal they’ve become famous for at music festivals around Australia. Dubbed “The Feast,” it features “royal” basmati rice with poppy seeds; potatoes, carrots and peas in a coconut curry; kofta balls with tomato chutney; and date halava.

To quench their thirst festivalgoers can choose between Ginger Lemonade and Mango Lassi. And for a snack nothing can beat the $5 bowl of koftas—a good meal in itself.

“At Australian music festivals, a bottle of water can cost $4, so when people see food for $5… well, they’re pretty stoked, mate,” says Nitai.

He explains that kofta balls—a fried savory dish made from just cabbage, carrots, flour, spices and water—are the catering program’s most popular offering. At a new festival where people aren’t familiar with Govinda’s, a freebie kofta on a toothpick will have them running back for a full meal.

“At Splendor in the Grass, we went through six or seven tubs of two and a half thousand koftas every day, and served a total of about 50,000 koftas throughout the whole festival,” Nitai says. 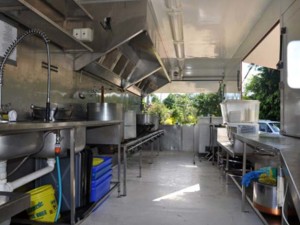 Inside the mobile kitchen

Working with Govinda’s catering isn’t easy. Staff start cooking at 8:00am, and often continue serving out food until 2:00am. They then clean up and try to chant some japa on their prayer beads, before catching about four hours of sleep, and then starting all over again. Occasionally, Nitai says, he hasn’t slept at all.

But the hard work is worth it. The sanctified food, and the friendly, service attitude of the devotees—who, with personal exchanges make each and every customer feel cared about—has a magical effect.

“People tell us our food is the best they’ve ever eaten,” Nitai says. “They say they eat only our food at music festivals. They want to know what’s in it that makes it so good.”

After eating prasadam for a few days, customers return with questions. They start with the basics—“Why are there no garlic and onions in the food?” then move on to the topic of vegetarianism, and finally begin to ask what Krishna consciousness is all about.

At some festivals, like Woodford, people also chant and dance at Rathayatra festivals or Harinamas held by the devotees. And by the end of the festival, they walk away with a Bhagavad-gita, a Higher Taste cookbook, and a basic knowledge of Krishna conscious philosophy. The following year, some return saying things like, “I bought your cookbook last year, and now me and my girlfriend are vegetarian.”

Over the years, several people have even joined ISKCON through Govinda’s Catering, which is recognized as undoubtedly one of the major reasons why devotees are viewed so favorably in Australia. 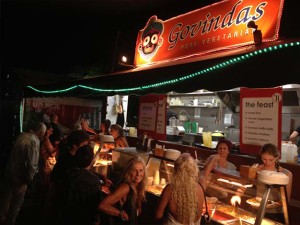 “We’ve gotten such a good, trustworthy reputation from prasadam distribution that festivalgoers will come to our stall and leave their ten-year-old kids with us for hours without hesitation,” says Nitai. “They’ll say, ‘Can you show them how to cook?” and ‘Can they help you guys out? You’re doing such a great job.’”

Others leave their bags, wallets and IDs at the Govinda’s stall, saying, “I know they’ll be alright with you guys. If you can’t trust the Hare Krishnas, who can you trust?”

The devotees are certainly trusted by all the popular music artists who play at the festivals. Routinely, these stars line up along with the regular revelers to get their fill of prasadam. Bands and managers can often be seen chatting and eating under the restaurant tent. And often, they return late at night after their gigs to take leftovers for their crew. Andrew Stockdale, the lead-singer of Wolfmother, who used to eat prasadam in Melbourne while a University student, is particularly favorable.

Last but certainly not least, festival organizers also trust the devotees, regarding them as quality caterers and inviting them—sometimes begging them—to become a part of different new festivals every year.

“Next, we’ll be at the country music festival Gympie Muster from August 23rd to 26th, and Woodford, our biggest event, from December 27th to January 1st,” Nitai says.

He’s most excited about an event that lands between the two, however—Eclipse 2012, from November 12th to 16th in Cairns, Northern Queensland. This tropical paradise near the Great Barrier Reef, reportedly the best place in the world to see the solar eclipse on November 14th, is expected to draw people from all over the world.

“It’s quite a spiritual event for a lot of people,” Nitai says, grinning excitedly. “It should be amazing!”